Between 2012 and 2015, the government of South Sudan received a credit line of nearly one billion dollars from Qatar National Bank (QNB) and CfC Stanbic Bank in Kenya to support efforts to import much-needed food, fuel, and medicine to the war-torn and newly independent country. The credit line—issued in US dollars in the form of letters of credit (LCs)—was intended to help local traders pay for these imports, considering the extreme shortage of hard currency and the weakness of the new local pound. 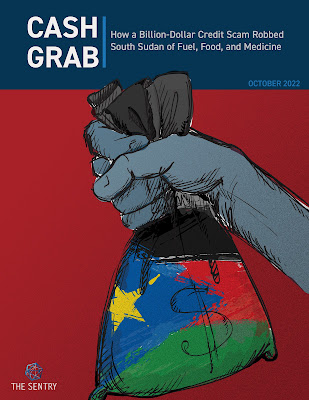 The government was supposed to allocate the LCs to traders, who could exchange South Sudanese pounds (SSP) at the then-official exchange rate of 3.16 SSP per dollar. Traders would then use the LCs—essentially a guarantee from the bank—to pay the exporter upon confirmation of delivery of the needed goods.

From the beginning, things went terribly wrong. The Sentry’s three-year investigation into the LCs program found that multimillion-dollar contracts were awarded to foreign-run companies, companies that only existed on paper, and inexperienced middlemen. Businesses with connections to the ruling class—including President Salva Kiir’s family, the then-governor of the central bank Kornelio Koriom, and multiple military officials—were among those that received contracts collectively worth tens of millions of dollars under the program, according to official documents reviewed in connection with this investigation. It appears that millions of dollars’ worth of essential pharmaceuticals, fuel, and food were not delivered. The government failed to repay the borrowed money and entered arbitration proceedings initiated by QNB at the International Center for Settlement of Investment Disputes. By July 2020, the matter remained unresolved, and the government reached a debt-restructuring agreement with QNB.

The failure of the LCs program and the subsequent corruption scandal resulted in shortages that would affect the country for years to come. Almost $1 billion effectively walked out of the country, and the human cost remains to be calculated. At the peak of the LCs program, when hundreds of millions of dollars in goods should have arrived in markets, more than two million people went without food, hospitals and clinics had to treat patients without medicine, and fuel shortages resulted in black market price gouging. In October 2015, just months after the last LC-backed contracts were awarded, the United Nations (UN) reported that 3.9 million South Sudanese faced severe hunger and tens of thousands were on the brink of famine. The country was saddled with unmanageable debts that continue to constrain the government’s ability to devote funds to crucial services. Food, medicine, and fuel shortages persist to this day.

A 2015 report by Stephen Wondu, the auditor general (AG) of South Sudan, was presented to parliament but was never made public. This report, as well as interviews with South Sudanese close to the LCs program, shows that the disbursement process developed into a confusing, disjointed system of documents and signatures that corrupt actors circumvented or subverted. The report, reviewed by The Sentry, provided a comprehensive overview of the timeline of events surrounding the LCs program, the parties involved, and the wrongdoing committed. The report did not identify which individuals or companies benefited directly from the lucrative scheme or may have violated the law, but it clearly set forth the facts surrounding the failure of the program. In 2015, the AG’s findings were presented to Kiir and to parliament, but no action was taken and no one was brought to justice or held accountable for the program’s failures—legally or politically. In August 2021, a copy of the AG’s summary report was circulated on social media in South Sudan, and Wondu asked parliament to initiate an action leading to the prosecution of those government officials who siphoned money out of South Sudan via the LCs program. To date, there have been no prosecutions for corruption linked to the LCs program.

The mismanagement evident in the LCs program has had dire and long-lasting consequences for the people of South Sudan, and the program’s failure is indicative of government corruption and ineffective rule of law. South Sudan’s public officials and institutions have undermined the nation’s ability to achieve economic progress, and the abuse of the LCs program is just one example. In 2021, for the second year in a row, South Sudan ranked as the most corrupt country in the world on Transparency International’s Perceived Corruption Index. The UN reported in September 2021 that “more than $73 million USD was diverted since 2018, including transactions worth almost $39 million USD in a period of less than two months.” The government’s failure to properly carry out the LCs program and repay the loans led to a succession of damaging government policies, including the wasteful and opaque practice of borrowing hundreds of millions of dollars from oil companies. The full scope of the fraud might never be uncovered, but there are measures that can be taken to promote transparency and accountability in the allocation of public funds and to help ensure that the people of South Sudan are not cheated on this scale again.