The British High Commisison, in partnership with the Financial Services Promotion Agency (FSPA) and the Board of Investment (BOI), is hosting a conference on Financial Technology (better known as FinTech) on 25 January 2017.

The conference will explore the development of Mauritius as a FinTech hub for the Sub-Saharan Africa region. A panel of experts, led by Nicole Anderson, CEO of FinTech Circle Innovate, will share their insight on how the British FinTech model can be applied in Mauritius to implement innovative solutions in the financial services sector and drive economic growth.

This event follows the visit of the Lord Mayor of the City of London to Mauritius in 2016 which laid the foundations for broadening the relationship between the Mauritian International Financial Centre (IFC) and the City of London. The conference programme will include a dialogue on British FinTech and panel discussions on Regulations and Compliance and Mauritius as a FinTech Hub for Africa. Key stakeholders such as Government officials, business leaders, regulators and academics will attend.

The panel of experts will also include of P.K. Kuriachen from the Financial Services Commission, Dhanesswurnauth Thakoor from the Bank of Mauritius, Ian Dillon from NOW Money, Mark O’Sullivan from Interpaytech, Carl Weir from Cross Verify, Harvesh Seegolam from the FSPA, Ken Poonoosamy from the BOI, Hirander Misra from GMEX Group, Kabir Ruhee from Rogers Capital, Ravin Dajee from Barclays Bank Mauritius and Vidia Mooneegan from Ceridian HCM Mauritius.

The British High Commissioner, Jonathan Drew, said: “With a GDP of around $3 trillion, the UK is the fifth largest economy in the world. Within Britain’s globally-facing economy, London is regarded as the world’s leading financial hub. FinTech is all about finding innovative solutions in both a fast-moving industry and ever-changing world. The Mauritian financial sector has developed rapidly over the past 20 years and should greatly benefit from FinTech to help the country reach high-income status”

The Chief Executive of FSPA, Harvesh Seegolam, said: “FinTech is a key segment for the Mauritius IFC. At the FSPA, we have a strategic focus to develop Mauritius as the FinTech Hub for the region. We are discussing with select global companies operating in this space, many of which are from the UK. This event will allow us to consolidate the Mauritius IFC as the regional FinTech destination, in line with our broader strategy.”

The Managing Direcor of the BOI, Ken Poonoosamy, said: “We have set as objective to develop the FinTech industry which is an innovative and fast-growing sector presenting tremendous opportunities for Mauritius. We believe the country’s significant value proposition can be further reinforced by leveraging on the synergies among the stakeholders from its strong Financial and Banking Services and well-developed ICT sectors. BOI is therefore proud to be associated with this event which is a first in Mauritius and will mark a cornerstone in the development of the local FinTech sector”
Posted by Amar at 23:48 No comments: 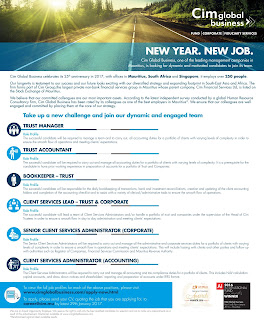 The Leasing Equipment Modernisation Forex Scheme will provide leasing finance in USD and Euros to export enterprises to expand and modernize their production facilities in order to enhance their competencies. The leasing facility will be limited to a total of Rs 75 million per enterprise.
Posted by Amar at 13:18 No comments:

Will Foreign Portfolio Investors Abandon Mauritius And Singapore In Favour Of Netherlands?

If anyone had suggested back in 2013, that India could rework its tax treaties with Mauritius, Cyprus and Singapore, giving it the right to tax capital gains – all in a span of three years – the idea would have been met with derision. Yet, India has managed to do just that, and nobody seems surprised.

Bloomberg
Posted by Amar at 12:09 No comments:

2017 Report on the State of the Legal Market

Law firms must find ways to effectively adapt to evolving competitive conditions — including the effective demise of the billable hour — or risk further erosion of their market positions. At the same time, the changing market dynamics present opportunities for firms that are willing to challenge conventional thinking, take risks and innovate new approaches to the delivery of legal services.

These are among the findings of the “2017 Report on the State of the Legal Market” issued today by The Center for the Study of the Legal Profession at Georgetown University Law Center and Thomson Reuters Legal Executive Institute.

The report discusses how, 10 years after the financial crisis and Great Recession began, its aftershocks still reverberate throughout the law firm market, which has shifted dramatically into a buyer’s market, resulting in a steady erosion of demand, rates, productivity, realization and profitability. And while the overall market for legal services continues to grow, law firms are dealing with new competitors and changing client needs. Indeed, clients are upending traditional law firm business models not only by demanding lower costs, but also disaggregating services to non-law firm service providers, imposing new pricing models, and reducing use of first- and second-year associates.

As to the billable hour, the report notes that its death has been “one of the most potentially significant, though rarely acknowledged, changes of the past decade.” Although firms still technically bill a majority of their work on a billable hour basis, budget caps imposed by clients mean that as much as 80% to 90% of law firm work is now done effectively outside of the traditional billable hour model.

Further, the report cautions that firms that merely place “band-aids on the old models” will face an increasingly uncertain future. Conversely, firms “that are able to adjust to the new market realities… and redesign their approaches to client service, pricing, legal work processes, talent management and overall structure will enjoy an enormous competitive advantage.”

Mike Abbott, vice president, Client Management & Global Thought Leadership at Thomson Reuters, agreed. “The law firm market is increasingly segmenting between firms willing to adopt new business models, processes for delivering legal services, and pricing, staffing and compensation models that reflect the new market dynamics, and firms that retain more traditional approaches,” Abbott said. “For example, this year’s report discusses how firms that take a more pro-active approach to initiating discussions on using alternate fee arrangements are seeing greater profitability, even for work that is done under such arrangements. And they are better positioned to compete in an increasingly crowded marketplace for legal services.”

The report is jointly issued annually and relies on data from Thomson Reuters Peer Monitor. It reviews the performance of U.S. law firms and breaks down the new market realities that drive the need for firms to take a longer-range, more strategic view of their market positions.
Posted by Amar at 23:28 No comments:

Veena Soyjaudah: “The Rs 12,7 billion assistance for the revised treaty has been peanuts”

The multiplying effects of the revised treaty of the India-Mauritius Double Taxation Avoidance Agreement (DTAA) on the Global Business sector will still be felt as the sell-off of other Management Companies follows, Veena Soyjaudah, CEO, Association of Trust & Management Companies,  says.